The Alabama Restaurant and Hospitality Alliance presented Joe Roszkowski and David Dekle of the Original Oyster House the Lifetime Achievement Award at this year’s Stars of the Industry Awards Ceremony. The 16th Annual Stars of the Industry Awards Dinner, which honored Alabama’s lodging, tourism, and restaurant industry, was held Monday, Sept. 28th at the Sheraton Hotel in Birmingham, Ala. The award has been given since 2004 in recognition of outstanding achievement in the restaurant industry and generous contributions throughout the state of Alabama. What a wonderful testament to their 32-year journey on a mission to exceed customer’s expectations and give back to the community they serve.

Through a shared dream, Joe Roszkowski, his wife Mary Lou and long-time friends and business partners David and Jane Dekle built one of the most iconic seafood restaurants along the Gulf Coast. The Original Oyster House first opened in Gulf Shores with sixty seats and ten employees. Southern hospitality coupled with the best tasting, fresh Gulf seafood and waterfront locations have ensured the restaurants’ place in history, having become one of the most beloved family restaurants in Mobile and Gulf Shores, Ala.

Joe is President/CEO and David Dekle is vice president of Superb Foods, the management company of the Original Oyster House restaurants, Geez Louise Boutique, Trading Company and Joe & Dave’s Sauces and Seasonings. Being named one of the best oyster bars in America by Time, Inc. along with having numerous awards for seafood gumbo, homemade desserts and the very popular fire-grilled oysters have kept their restaurants in the headlines, but it’s the years of unnoticed service that makes Joe and David standouts in the community.

Through outreach, volunteerism, donations and sponsorships, Joe and David have been able to give back to area schools, athletics, churches charitable organizations and many other worthy causes. Every September 11 the restaurants offer a free lunch to all first responders in memory of those who lost their lives. Each year the restaurants also award 2 scholarships to high school seniors in memory of the late Chelsea Garvin, an employee of the restaurant who exemplified a giving spirit.

In 2014, Joe and David were recognized by the local Chamber as leaders in environmental stewardship because of the company’s proactive environmental stance and sustainable practices, including converting used frying oil into biodiesel to fuel company vehicles, installing the only wind turbine on the Mobile Causeway for electricity and installing solar heaters. In 2014, the restaurants became leading sponsors of the Oyster Trail that supports oyster restoration and gardening and published an Oyster Trailblazer Calendar to educate and support the Oyster Trail.

In 1999, the Small Business Administration recognized Joe with the prestigious Entrepreneuriaal Success Award for the southeastern USA. Joe is president and an active board of directors of Archangel Communications/Archangel Radio (1410 am), a major communication apostolate for Catholic teaching and a central hub for the Catholic community in the Mobile Archdiocese. Joe is also president of the board of directors of Baldwin County Catholic Social Services and active in Cursillo Retreat Ministry as well as worked on the Business Development Committee for the new St. Michaels Catholic High School scheduled to open fall of 2016 in Baldwin County. He has also served as chairman for the Mobile Archdiocese Catholic Charities Appeal.

As a Knight of Columbus, David is also active in the Catholic Faith. David has been influential in the communities he serves and has been a longtime sponsor funding Catholic School scholarships for needy families. Through his advocacy for the physically and intellectually challenged, David helped implement programs that have changed lives forever, including the disabled Veteran’s fishing program he helped launch in 2010. David also actively supports the Bay Area Food Bank which distributes over 16 million pounds of food annually.

The Alabama Restaurant and Hospitality Alliance is a non-profit corporation, dedicated to serve the needs of the foodservice hospitality industry in the state of Alabama. The Association provides educational programs, membership services, legislative and government relations, informational services, and promotes the industry for its members. For more information visit www.alabamarestaurants.com. 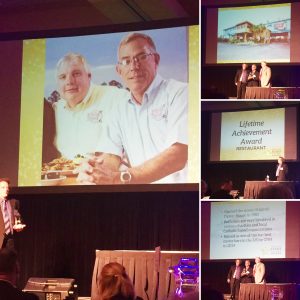 The ARHA presented Joe Roszkowski and David Dekle of the Original Oyster House with the Lifetime Achievement Award at this year’s Stars of the Industry Awards Ceremony held on Sept. 28 at the Sheraton Hotel in Birmingham.

Pictured from left are Joe and Mary Lou Roszkowski and David and Jane Dekle attending the 16th Annual Stars of the industry Awards Dinner where the best of the best in the restaurant and hospitality industry are recognized for their contributions. 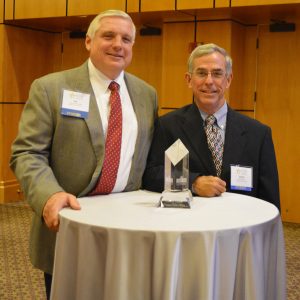 From left are Joe Roszkowski CEO/president and David Dekle, vice president of the Original Oyster House. Their 32-year journey on a mission to exceed customer’s expectations and give back to the community was recognized by the ARHA.