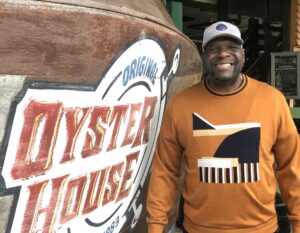 Pictured is Roderick Marks who celebrates his 30th year as key kitchen shift leader at the Original Oyster House on the Mobile Causeway. Cooking represents more than a profession. Marks’s proud heritage infuses his culinary skills and enriches every meal.

Historians describe soul food as down-home cooking that began in the rural South and has been passed down through generations. Meet Roderick Marks who celebrated his 30th anniversary as key kitchen shift leader at the Original Oyster House on the Mobile Causeway. For someone whose deep-rooted traditions were irrepressible, his staying power is not surprising. It is fed by those very traditions that link past to present. Marks was born and raised in Mobile, Alabama. His culinary curiosity was sparked by his late mom, late grandmother and aunt who handed down soulful recipes steeped in love and lore.

The oldest of five children, Marks was the only boy and was charged with caring for his sisters while his parents worked. As the supervisor at the Mobile County Jail, his mom cooked from 4:30 am until noon. Before retirement, his father was employed by the Mobile Water Company and moonlighted as a janitor. His parents laid a solid foundation with a work ethic that was as unobtrusive as it was effective. Looking back, Marks recognizes in preparing his sisters’ meals of chicken, meatloaf, lima beans and cornbread, he was inhabiting a profession he has been practicing ever since.

Marks had been employed at various local eateries including O’Charley’s, Bleachers, Cracker Barrel and Mobile Infirmary Dietary to name a few. When cashiering at a gas station, he encountered all types of people and attitudes. Whether money was thrown at him or handed over thoughtfully, he was unshakably courteous. And from time to time, he overlooked the cold silence that accompanied his attempts to be hospitable. Having risen above these negative experiences, he decided to enroll in Southeast Technical College (Remington College) for electronics. And although he didn’t switch careers, Marks affirms that his education contributed to the person he is today.

When Marks was hired at the Original Oyster House in 1991, he steamed, grilled, sautéed and fried Gulf seafood downstairs at its initial location before it was destroyed by Hurricane Katrina. At the time, he did not understand the big picture, the Oyster House’s mission – to exceed customer’s expectations. He claimed to be a hothead in those early years, not able to understand why others didn’t carry their load.  He attributes Mary Lou Roszkowski, retired VP of operations, with championing his longevity and benevolent attitude. He recalls after 15 years of employment when Katrina hit, he almost didn’t return. It was Roszkowski who called him to the restaurant’s new location a few miles down the road, to talk. As they spoke, Roszkowski inspired a sense of leadership and responsibility while affirming Mark’s contribution to the success of the business. She reminded him that not everyone worked at his level, and encouraged him to bring them up. Her words really stuck.

Upon his return, Marks was promoted to the shift leader. He knows now that it takes a team, the front of the house and the back of the house, for the restaurant to run like a well-oiled machine. And although his kitchen crew goes unseen, the food represents who they are. Marks preaches the visual appeal of every dish affects the guest’s overall experience.

Marks is a stickler for presentation, craftsmanship and consistency. He emphasizes prepping seafood correctly which ensures a perfect fusion between the coating and the food it protects. On his watch, the batter doesn’t flake off. Because his instincts are so fine-tuned, he needs no timer or technology to assist him. He’s old school and regards frying with the same gravity as other chefs reserve for more prestigious operations. In his grilling, he has mastered a perfect, golden brown finish. (For him a dried-out appearance is as unthinkable as it is among his customers.) Whether it is shrimp, flounder, oysters, crab claws or even bread, presentation must pass muster.

Marks loves when the restaurant is busy, because this is when he shines. Staying calm and focused, multitasking with good speed and working well with his team makes a difference. Cooking represents more than a profession. Marks’s proud heritage infuses his culinary skills and enriches every meal. Just as his mother prepared food for a living, it is in his blood to do what he does so well with such spirited dedication.

Pictured is Roderick Marks who celebrates his 30th year as a lead cook at the Original Oyster House on the Mobile Causeway. Cooking represents more than a profession. Marks’s proud heritage infuses his culinary skills and enriches every meal.