While diners savor fire-grilled oysters at the Original Oyster House, they also will be contributing to the first Alabama Oyster Shell Recycling Program. The program was officially launched on Friday, October 28, 2016 at the Original Oyster House restaurant on the Mobile Causeway. Mayor McMillian of Spanish Fort and Laura Byrne, deputy director of communications for the city of Mobile, joined the Alabama Coastal Foundation, the Oyster Shell Recycling Advisory Committee and the Mobile Chamber of Commerce for short presentation introducing the program and a ceremonial ribbon cutting.

Spearheaded by the Alabama Coastal Foundation (ACF), the Oyster Shell Recycling Program is made possible through a two year grant from the National Fish and Wildlife Foundation (NFWF). The program will recycle oyster shells from restaurants and get them back into Alabama waters, enhancing oyster production among other benefits. What makes the program even more powerful is it exemplifies the ACF mission of protecting Alabama’s coast through cooperation, education and participation.

“The grant will help us to educate and train restaurant staff, educate consumers and create a sustainable program. It will be initiated in a phased approach, beginning with seafood restaurants on the Mobile Causeway. By spring the program will expand into Gulf Shores and Orange Beach then to other areas,” claimed Mark Berte, executive director of ACF.

The NFWF grant pays for oyster shell recycling bins, the drop off and pick up of the bins, and the cleaning of the bins. This makes it an easy transition which is key for encouraging restaurants to participate. David Dekle, co-owner of the Original Oyster House restaurants and an Oyster Shell Recycling Advisory Committee member, was one of the first to sign up.

“The program aligns with our core value of stewardship and will enhance the oyster population, which we serve a lot of. A program that can increase the oyster reef is a benefit for our community who grew up eating oysters. 85% of the world’s oyster reefs are gone impacting not only oysters but all the marine life that inhabit the reef. As sponsors of the oyster trail, we learned a great deal about the benefits that oysters have on our environment, our economics and our health. I actually tell folks coming down with a cold to eat oysters because it contains the most zinc than any other food. Best of all, this program will bring attention to how important it is to get oyster shells back to the reef rather than a landfill. We can make a difference in our community,” stated Dekle.

According to the 2014 Commercial Fisheries Statistics by the National Oceanic and Atmospheric Administration, Gulf of Mexico oyster landings declined almost 28% since 2009, the year prior to the Gulf of Mexico Oil Spill. Natural oyster shell is critical and the preferred material for oyster larvae to attach to and grow on. Reefs protect coastline from erosion and tidal surge during inclement weather and Alabama is historically the largest processors of oysters in America. Getting oyster shells back in Alabama waters will affect everyone from the oysterman, to the processor, to the distributors, to the restaurateurs and to the consumer.

Chris Blankenship, director of Alabama Marine Resources Division, is charged with managing Alabama’s public oyster reefs. “Over the past 3 years, the state has spent around 6 million dollars to put out over 100,000 cubic yards of oyster shell on more than 1000 acres of water bottoms,” said Blankenship. “This program is vital to our state. Without the shells in the water, it’s hard to have a viable oyster industry here. These shells have multiple uses. They can be used on the public oyster bottoms, or natural reefs, in oyster restoration projects along the coast or shoreline stabilization projects. The oyster shells from restaurants will be stored on our property to season for about 6 months. An advisory council will ensure those shells will be used for the best benefit.” 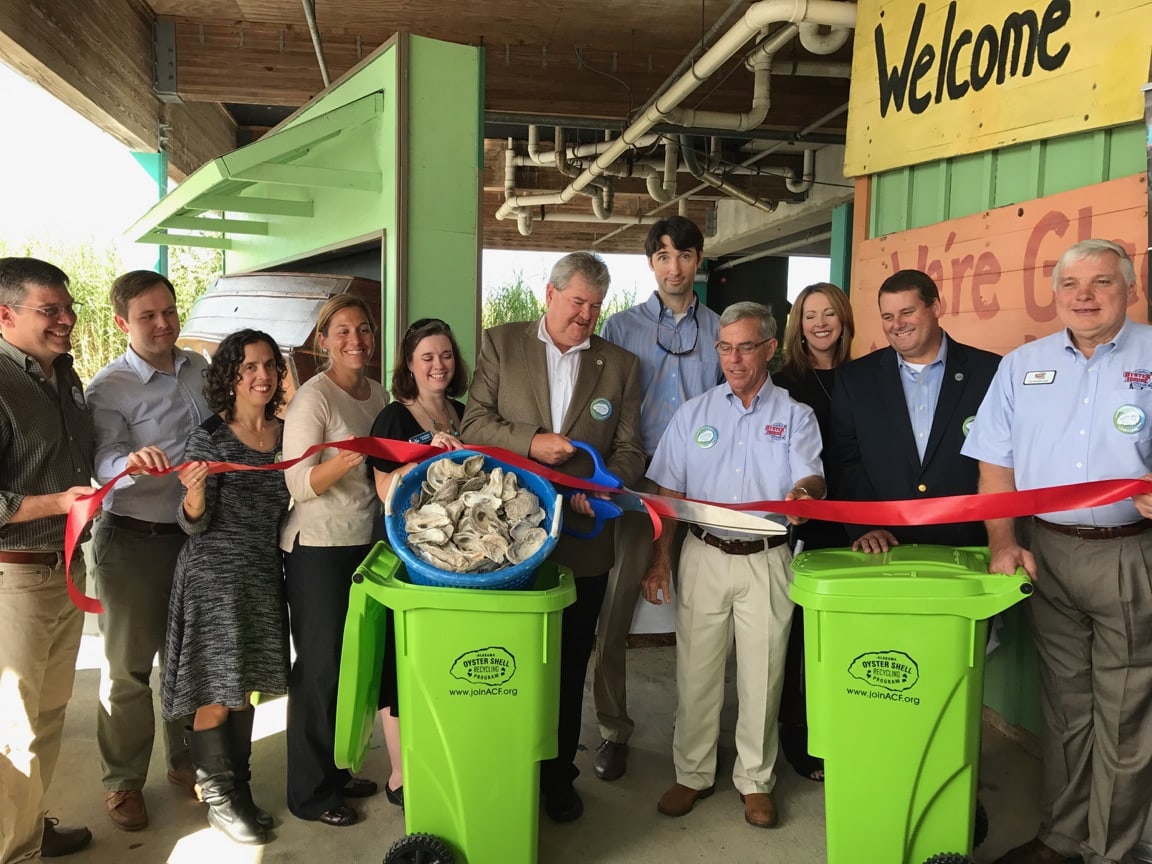 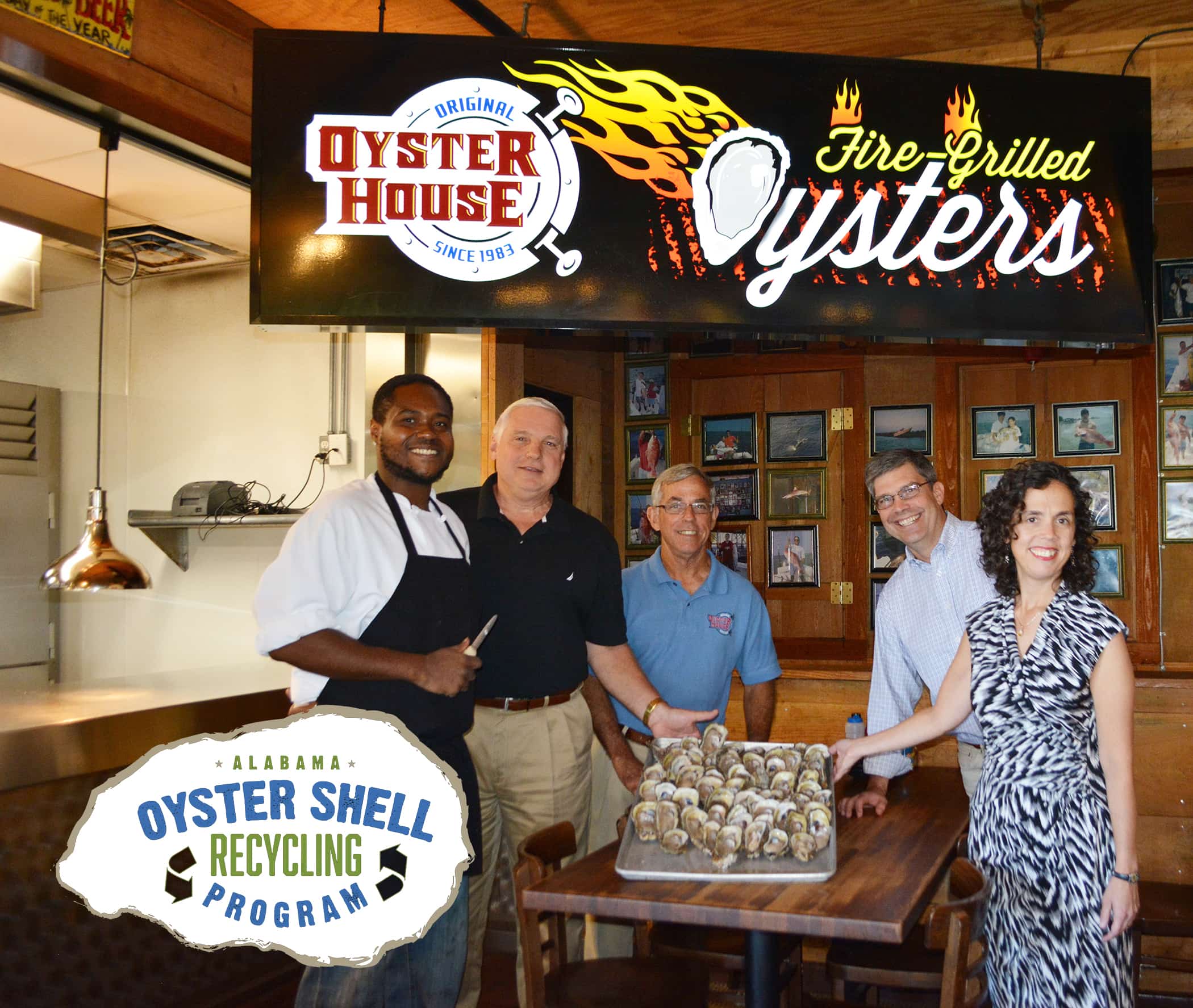 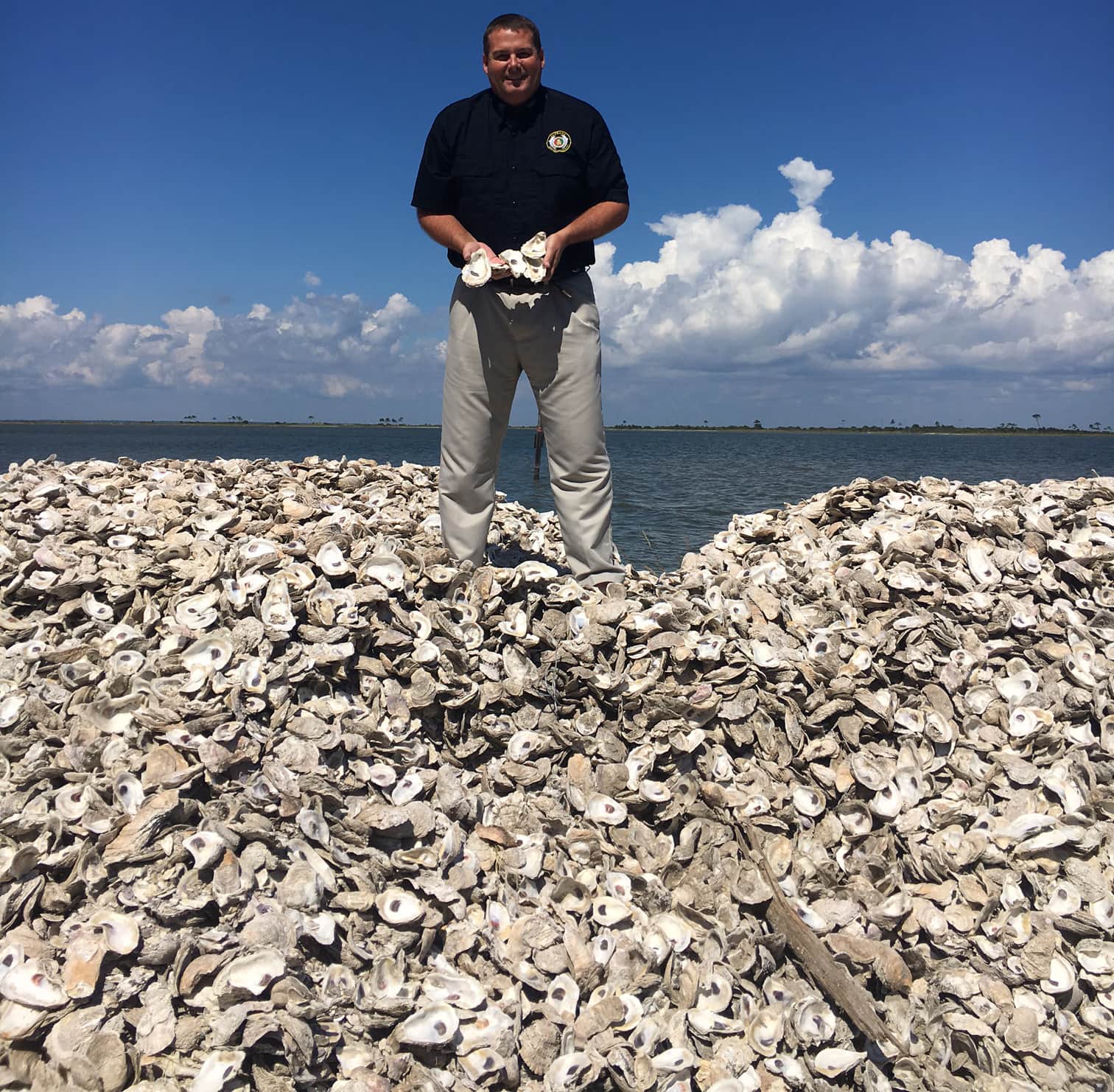 Chris Blankenship, director of Alabama Marine Resources Division, stands atop oyster shells that will be returned to Alabama waters.