James Nail was recently promoted to assistant general manager of the Gulf Shores’ Original Oyster House. In 1989, Nail relocated to Gulf Shores from Detroit, Mich. Employed with the restaurant for nearly 26 years, Nail started as a dishwasher in 1991, became a cook in 1993, promoted to chef in 1995 and then to kitchen manager in 1998. Being located in Alabama’s number one tourist destination, Nail has helped renovate and expand the restaurant for growth and after hurricanes and storms and has helped build one of the most iconic seafood restaurants on the Gulf Coast.

Nail claims his favorite aspect of working at the Original Oyster House has been watching others work their way up the ranks. Bud Morris the general manager, started as an server in the kitchen while Anatolie Simion the dining room manager, started as an oyster shucker. Nail says watching others be rewarded for hard work inspired his dedicated work ethic. “I’ve been really blessed to work alongside an incredible restaurant family who believe in our core values and mission to exceed customers’ expectations. When we’re real busy, I can get in the zone and it’s like having oyster liquor in my veins,” stated Nail.

When Nail is not at the restaurant he loves spending time with his wife and five children who range in ages of 15 to 23. Family is most important to Nail and he loves spending quality time with his kids bowling among other activities. If he has spare time from both work and family, he plays pool with friends. Even with an incredibly busy schedule, Nail signed up to volunteer at the Robertsdale Hurricane Shelter after it opened for Hurricane Irma victims. 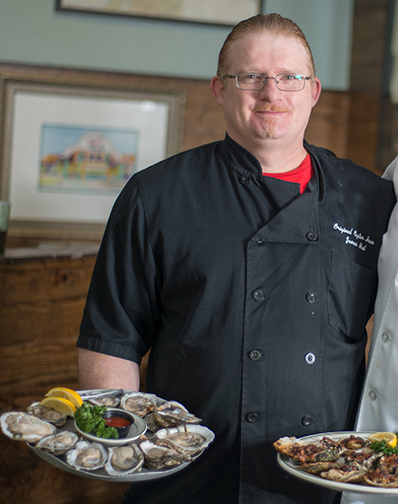