Quarter of a Century Milestones Celebrated at the Original Oyster House

At the height of the pandemic as businesses fight for survival, the restaurant management team felt it was extremely important to recognize this seasoned group. Each employee received a gift in recognition of their milestone. “It is with heartfelt congratulations that we celebrate your anniversary with the Original Oyster House. We want to acknowledge your integrity, sense of responsibility and commitment through those years. Thank you for serving through good times and in bad – tropical storms, hurricanes, pandemic. You have played such a significant role in our success and have been an inspiration and mentor to our restaurant family. We sincerely value your loyal service and dedication,” said Jim Harrison, general manager of the Original Oyster House, Mobile Causeway.

The Original Oyster House has become the “must-go-to” place for great fresh Gulf seafood, service and Southern hospitality and for its panoramic waterfront sunsets. A top-spot for hand-shucked and fire-grilled oysters, the Original Oyster House has also become legendary for its homemade gumbo, cheesy grits with blackened shrimp, as well as handcrafted desserts including its famous Chocolate Chip Peanut Butter Pie. In 2016, the Original Oyster House became the first restaurant in the state of Alabama to recycle oyster shells through the Alabama Coastal Foundation. As of January, an estimated 14.7 million oyster shells to date have been recovered from participating Gulf Coast restaurants. 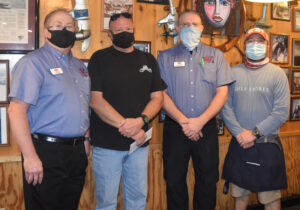