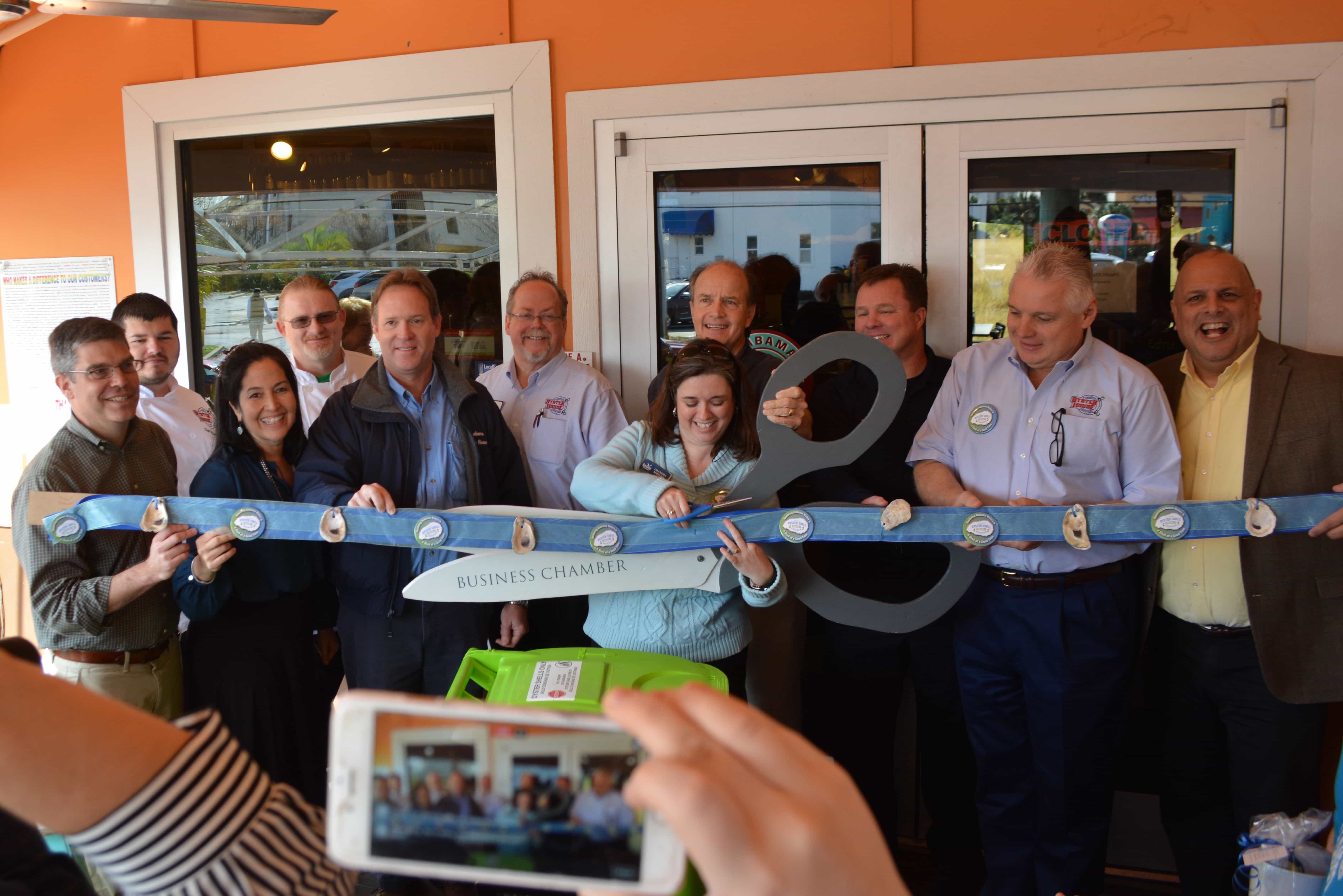 While diners savor fresh Gulf oysters at the Original Oyster House in Gulf Shores, they also will be contributing to Alabama’s first Oyster Shell Recycling Program. The program officially launched in Gulf Shores on Thursday, January 26, 2017 after being successfully piloted on the Mobile Causeway in October. Mayor Robert Craft and Battalion Chief Bo Smith with the city of Gulf Shores, joined the Alabama Coastal Foundation, the Oyster Shell Recycling Advisory Committee and the Gulf Shores Chamber of Commerce for a presentation introducing the program and a ceremonial ribbon cutting.

Spearheaded by the Alabama Coastal Foundation (ACF), the Oyster Shell Recycling Program is made possible through a two year grant from the National Fish and Wildlife Foundation (NFWF). The program will recycle oyster shells from restaurants and get them back into Alabama waters, enhancing oyster production among other benefits. What makes the program even more powerful is it exemplifies the ACF mission of protecting Alabama’s coast through cooperation, education and participation.

The NFWF grant pays for oyster shell recycling education and bins, the drop off and pick up of the bins, and the cleaning of the bins. This makes it an easy transition which is key for encouraging restaurants to participate. Joe Roszkowski, co-founder of the Original Oyster House restaurants, was the first to sign up.

“The program aligns with our core value of stewardship. As sponsors of the oyster trail and Mobile’s Oyster Gardening Program, we learned how oysters impact our environment, our economics and our health. For years these dedicated scientists, environmentalists and educators have worked to get oyster shells back in the water. We were so grateful to have been given an opportunity to pilot Alabama’s first Oyster Shell Recycling Program in October on the Mobile Causeway and are proud to start it here in Gulf Shores. What a blessing it is to live in one of the most beautiful places and what an honor it is that we can make a difference doing what we love, eating oysters,” stated Roszkowski.

“By participating in the Oyster Shell Recycling Program, local restaurants save on waste disposal costs and help support a commercial fishery that is essential to their business and the local economy,” claimed Mark Berte, executive director of ACF. “Six restaurants participated in Phase 1 that piloted this program on our Causeway Route. We were so successful that we expanded the route ahead of schedule and added two restaurants in Mobile and one in Fairhope. In addition, we have started Phase 2, the Gulf Shores and Orange Beach route, ahead of schedule with the addition of seven more restaurants. To date we have 16 partners and hope to double that number this summer.”

According to the 2014 Commercial Fisheries Statistics by the National Oceanic and Atmospheric Administration, Gulf of Mexico oyster landings declined almost 28% since 2009, the year prior to the Gulf of Mexico Oil Spill. Natural oyster shell is critical and the preferred material for oyster larvae to attach to and grow on. Reefs protect coastline from erosion and tidal surge during inclement weather and Alabama is historically the largest processors of oysters in America. Getting oyster shells back in Alabama waters will affect everyone from the oysterman, to the processor, to the distributors, to the restaurateurs and to the consumer.

“We are glad to have both Original Oyster House locations participating in the oyster shell recycling program. Our partnership with them on this initiative and many others has been very beneficial to the marine resources of Alabama and to the men and women of the seafood industry,” stated Chris Blankenship, director of Alabama Marine Resources Division and an Oyster Shell Recycling Advisory Committee member.