If you have ever dined at the Original Oyster House on the Mobile Causeway, there’s a great likelihood Cedric Hudson prepared your dish. As the longest tenured employee at either of the restaurant’s locations, Hudson celebrated his 35th year in 2021. What makes his longevity even more impressive is that his primary job is as a voting machine tech for Mobile County. For the past 35 years, Hudson has worked 8 to 4 pm in the election department in west Mobile. Afterwards, he drives to the Causeway to clock in for the dinner rush. In a time where work ethic, commitment and accountability are at an all-time low, Hudson’s anniversary epitomizes dependability at its finest.

Born and raised here in Mobile, Hudson was the second oldest of four brothers. As a senior in high school, he became a bag boy at the local grocery store. He acquired a sense of responsibility, loyalty and duty early on.

When Hudson graduated high school, his mother, who worked for Mobile County, helped him get his next job. Hudson has worked for Mobile County ever since, for 36 years. As a voting machine technician, he prepares, tests and corroborates the voting equipment runs correctly. He is onsite to troubleshoot any issues during the polls. The integrity of his work makes a huge difference come Election Day. His parents and two younger brothers have since passed away but he has a surviving brother and other close family members in the area.

Hudson’s cousin worked at the Original Oyster House when it first opened on the Causeway and shared they were hiring. Joining the Oyster House team in 1986 as a dishwasher, he found another lifelong career after only a few months when he was promoted to cook. Through many ups and downs, Hudson experienced the restaurant’s growth and success as well as the flooding, tropical storms, hurricanes, the BP oil spill, a relocation after Katrina and now the pandemic.

On August 29, 2005 Hurricane Katrina slammed into the Gulf Coast causing catastrophic devastation. The record storm surge ravaged downtown Mobile and the adjacent causeway. The surge all but eradicated the first floor of the restaurant leaving only enough structural support to keep its second story from falling through. The building was a total loss.

Before Katrina destroyed the restaurant, which was located only a few miles west of its current location, the restaurant offered two dining areas, one upstairs and one down. The upstairs served stuffed shrimp, stuffed flounder and other signature dishes. Fried and steamed seafood was the common fare downstairs as well as a featured oyster bar. Hudson gained his footing cooking upstairs. He also helped lay some ground work for operations.

Today, Hudson claims the set up on the line is similar to early days, with three to four cooks teaming dinner hour, depending on how busy it is. Masks and other Covid mandates have made restaurant work more difficult especially in a hot kitchen. But even after a full shift, Hudson shows up. He does admit to getting tired at times.

Reliable, consistent and eager to please, Hudson has much in common with the restaurant that has become a legendary seafood stop for tourists and locals alike. The secret to his longevity is persistence – another quality Hudson and the Oyster House share. 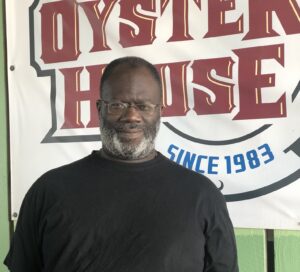